My 10-piece band, the Hartford Jazz Society's New Directions Ensemble performed a concert at the University of Massachusetts on January 29th, 2013 and it was recorded by New England Public Radio.  I thought it was one of our better performances, so I am happy to share it with you here.

Here is the roster which performed at UMASS's Bezanson Recital Hall:

Because it is an hour and a half concert, which includes my blabbing between tunes, you might want to scroll around to find a specific piece.  Here are the starting times:

The next performance of the Hartford Jazz Society's New Directions Ensemble is slated for Friday, April 26th at the Polish National Home in Hartford, CT.  The Newington High School Jazz Ensemble, directed by Stephen Brookes will be the opening act.  A student workshop is scheduled from 4:30-6pm and is open to the public.  The concert begins at 7 p.m.

New charts are in the works and the band sounds better every time we play.  Purchase your tickets through the Hartford Jazz Society or at the door.  See you there!
Posted by Earl MacDonald at 10:51 AM No comments: Links to this post

Teaching beginning pianists isn't my forte, and given my son's temperament, I knew early on that my attempting to teach him to play the piano wouldn't be a good idea.

Truth be told, we had his first piano teacher selected while we could still carry him around in an infant car seat.  She's a very experienced teacher with a large studio out of her home.  We were consistently impressed when we heard her play at a local church, and weren't surprised to learn she had earned a Masters degree in piano performance from a respected conservatory.

We started in January (last month), when Logan turned 7.  Here is a picture from his first lesson: 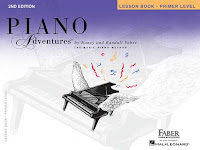 The lessons and our practice sessions have been going very well.  I am surprisingly impressed by the curriculum.  We've been working from a series of books called "Piano Adventures" by Nancy and Randall Faber.  We were issued four books, which are interrelated, but organized as: lesson book, theory book, technique and artistry book, and performance book.

Already he has been introduced to quite a few musical concepts:  rhythmic values, including quarter notes, half notes, whole notes, as well as dynamics (quiet vs. loud).

Here is Logan playing "Old MacDonald".  I was especially proud during this run through as he refrained from stopping or getting visibly mad when he made a couple of little mistakes.

Posted by Earl MacDonald at 8:13 PM 2 comments: Links to this post

During winter recess I wrote a series of articles about jazz ensemble direction and rehearsal practices.  Topics included the incorporation of sight-reading, improvisation instruction, and structured listening into rehearsals, as well as ideas pertaining to concerts and audience development.  To wrap things up, I am posting excerpts from this semester's revised course outline.  It summarizes and includes many of the ideas touched upon in my previous posts.  In addition to describing the ensemble and my instructional goals, the outline includes a breakdown of how rehearsals are structured, and a new grading plan.