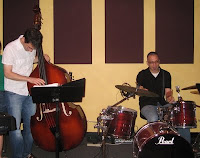 People (in the know) have been asking about my drumming debut.

Overall I think it went quite well, although I certainly have a long way to go. YouTube videos have been a great resource, especially lessons posted by Tim Metz and Conor Guilfoyle.

For those of you who don't know, I'm now playing drum set during the regular 10AM jazz service at St. Pauls Collegiate Church in Storrs. My friend (and professional saxophonist) Kris Allen has similarly undertaken learning the string bass. Needless to say we are having a blast. Kris' wife, pianist Jen Allen, has been very gracious and patient in tolerating our mid-life tomfoolery. Thanks Jen!
Posted by Earl MacDonald at 7:00 AM 1 comment: 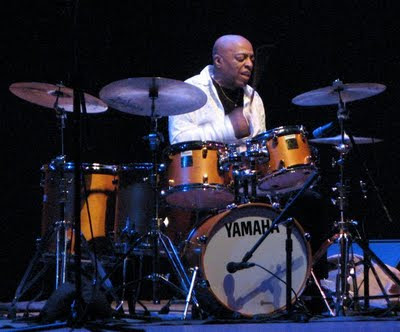 I caught Roy Haynes' 7:30PM show on August 20th at Dizzy's Club Coca-Cola, following my CD mastering session. I am extra grateful to have seen Roy Haynes (at age 84!), because I regrettably missed opportunities to see many of the other great drummers before their passing (Tony Williams, Elvin Jones, Max Roach, Art Blakey, etc.). Roy Haynes acts, looks and plays like someone less than half his age. It is remarkable to think that he has played with literally all of the great, historic jazz icons: Louis Armstrong, Lester Young, Charlie Parker, Miles Davis, John Coltrane, Eric Dolphy, Stan Getz, Chick Corea, etc. I am proud to say that Roy Haynes recorded one of my compositions, "Wanton Spirit" with my piano mentor, Kenny Barron.

This incredible performance started with each of the three sidemen taking short, unaccompanied solos. Roy's brief drum solo segued into a Wayne Shorter composition. "My Romance" followed, with an especially impressive solo by pianist, Martin Bejerano. Midway through Monk's "Trinkle Tinkle" bassist David Wong broke a string. Roy asked Martin to play a solo number and he chose "Easy to Remember". Both his sound and technique impressed. Upon Wong's return, he played an unaccompanied version of "Darn That Dream". Although I have heard the final selection before, I couldn't recall the title or composer. It was a straight eighths folksy number, which was reminiscent of Keith Jarrett's 1970s compositions or perhaps something by Pat Metheny.

I spoke with pianist Martin Bejerano, following the gig. After complimenting him lavishly, I asked how he landed the gig with Roy. He replied that he went to school with Roy's last saxophonist Marcus Strickland, in Florida, and he recommended him. [So much for the theory that one must move to NYC to "make it".]

As a "wannabe" drummer, I had the perfect seat: next to Roy! I learned a few tricks - like playing time on a closed hi-hat with the right hand, while using the left hand to add interesting rhythmic embellishments around the timekeeping. He had 3 cymbals, but played time only on the one ride cymbal (while using sticks); reserving the others for punctuations and color. He played one song in its entirety with brushes; one hand on the cymbals and the other comping on the snare. Not once did he play time on the snare with brushes.

I learned some things, but most importantly, I enjoyed myself immensely.  It was a treat to see an older jazz musician who is still playing at the top of his game.  On many occasions seeing someone who sounded great on records during the 1950s is a terrible disapoinment now.  This certainly wasn't the case with Roy Haynes.

An added ironic bonus was sitting next to a tourist, Ken, from my home town of Winnipeg. We had some fun conversations before and after the show, ranging from hockey to architecture. It was a memorable evening.
Posted by Earl MacDonald at 2:33 PM No comments: 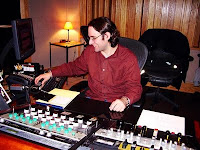 I had my big band CD recording mastered at Masterdisk in New York City yesterday. The engineer was Randy Merrill, whose bio and credits you can read by clicking on his name.

Mastering includes the following steps:
- attaining consistency from track to track through the use of compression & gain
- correcting minor deficiencies in the mix
- increasing the overall volume level of the CD
- putting the mixed songs in order, with the correct amount of space between each song

Although I provided input when I felt it was needed, the mastering process was probably the least collaborative stage in the recording process. Randy clearly knew what to listen for, and after watching him work through a couple of tunes, he earned my complete trust. It was valuable to have the evaluative perspective of "a fresh, unbiased set of ears". The record sounds vibrant and alive, and I am thrilled.

Now that all the technical aspects of the recording project are completed, I can switch my focus entirely to the business aspects of releasing and promoting the CD. Disc Makers has published a helpful resource, "Planning Your Album from Beginning to End" which I am studying and would highly recommend to anyone trying to navigate their way through the rapidly changing music industry.

Stay tuned.
Posted by Earl MacDonald at 8:18 PM No comments: