I adore my Heintzman upright piano.  It's solidly built, speaks equally in all registers, sounds beautiful, and feels great to play.  By looking up the serial number (41146), I learned it was constructed in 1912 in Toronto, Canada. 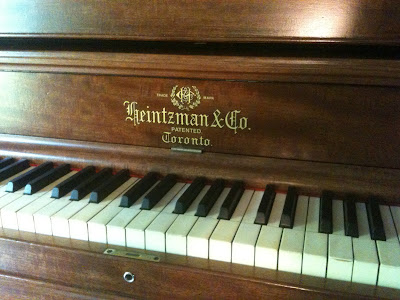 Legend has it that Theodor August Heintzman worked side-by-side with Henry E. Steinway in a Berlin piano factory, prior to their immigrating together to North America.  The superior craftsmanship between the two piano brands is certainly comparable. 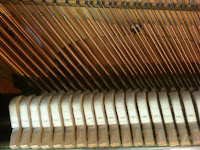 I bought mine in 1992 from Bill Weiss, who was Winnipeg's finest piano technician.  He was in his 80s at the time and has long since passed.  Mr. Weiss rebuilt the instrument, replacing the hammers and bass strings.

My piano tuner and longtime family friend, Garry Varty found it for me.  Mr. Varty was born blind and enjoyed the irony in saying he "looked long and hard" for an instrument of this quality, specifically for me.

With great difficulty (a long story), I shipped it to Connecticut in 2003 after getting married and buying a home.

Earlier this month I spent a week in Kincardine, Ontario performing and teaching at the Kincardine Summer Music Festival.  I was overjoyed when I lifted the piano lid at the performance venue and saw that I would be playing a Heintzman all week.  I was a bit perplexed, because it looked new, and I was under the impression Heintzman pianos were out of production for some time.  I have since learned that the Heintzman name was purchased by a Chinese manufacturer, who claims to build them according to the originals specifications. 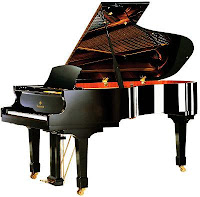 The new Heintzman was a huge disappointment.  They may have replicated the original dimensions, but something is clearly lacking --- "T.L.C." and old-school craftsmanship which reflects pride in one's work.  The instrument's quality was on par with Young Chang pianos, which deflate my sails every time I am forced to play one.  Notes stuck.  The upper register was weak, thin and metallic sounding.  It didn't hold it's tune. As the week progressed, the piano became more and more unravelled.  It was a despicable instrument and I hope to never encounter one again.

At times I envy horn players (did I really just say that?!!).  It must be nice to bring one's own, maintained, reliable, predictable instrument to a gig.  Pianists on the other hand are at the mercy of the instrument they are dealt.

I pride myself in getting a decent sound out of even the poorest of pianos, but some nights it is harder than others to overcome, compensate for, and not allow myself to become entirely distracted by poor workmanship or lack of proper maintenance.

Jazz Camp takes a lot out of me.  After a week of teaching during the day, performing at night, and socializing with old friends, I'm wiped.

I just returned from the Kincardine Summer Music Festival, which is organized by my friend, trombonist Jules Estrin.  The faculty was comprised entirely of friends with whom I went to McGill University in the late 1980s.  They are now all highly respected jazz educators and players in Toronto and Montreal.

Ralph was one of my jazz professors at Rutgers and he played on both my "Schroeder's Tantrum" and "Re:Visions" CDs.  It was great to see (and hear!) him.  What an inspiring player!

I also really enjoyed the teaching aspect of the KSMF.  The students in my ensemble were bright and inquisitive.  They eagerly took notes and asked plenty of thoughtful questions.  I probably gave them a full year's worth of practice material.
On Friday I played an afternoon concert with the JazzFM Youth Big Band, comprised of Toronto's top high school jazz students.  These kids can really play!  Drummer Ted Warren and saxophonist Kelly Jefferson were also featured guests.

I have taught at many jazz camps over the years but this one is by far my favorite.  I highly recommend it to aspiring young jazz players.  The location is gorgeous, the price isn't exorbitant, the faculty are superb, and the evening concerts rival what you would hear in a Toronto or New York jazz club.  For info about next year's camp, visit the Kincardine Summer Music Festival's web page: http://www.ksmf.ca.  I hope to see you there next summer!