I’m still having a difficult time relating to my fellow Christians. Election time here in the U.S. makes it especially tough.

As you know, very little surprises me any more, but a friend’s Facebook status genuinely caught me off guard this weekend. Here it is:

“Are you looking for a president who will protect the unborn child's right to be murdered in its mother’s womb? OBAMA is your candidate. Wake up people!”


Strangely, the “wake up” portion is what I found most offensive. You know I haven’t been asleep or ignoring the issues in this election. I have trouble understanding why every election season, there are many believers for whom the singular issue of abortion decides how they will vote. Frankly, I don’t think it is me who needs to wake up. Yes, I can see the importance of continued discussions about abortion (especially in light of recent comments by Republican Congressmen Todd Akin and Joe Walsh), but there are SO MANY other issues also at stake.

Even if we were to focus the conversation on abortion, Romney isn’t exactly it’s most vehement opponent. Last week he told the Des Moines Register that he wouldn’t pursue abortion legislation if elected president. So, why then is Romney the logical choice for the many Christians? Why are they so confident that he will protect the unborn?

I’ve been reading the biblical book of Acts. In the second chapter it talks about how the believers sold their possessions and goods and gave to anyone in need. Doesn’t this sound like the socialism Republicans adamantly oppose and criticize? Aren’t Obama’s health care plan, budgetary priorities, social programs and tax plan much more in line with what is described in Acts 2:45, than what Romney and the Republicans are suggesting? Shouldn’t our focus be on “Pro-living”, and not just pro-life? For Christians and all Americans, shouldn't education, helping those in need, and ending wars be on an equal playing field to saving the unborn? Let’s also aid the living and make some societal progress.

My frustrations are many, Lord. I pray that you would help me during this election season not to lose my cool, my faith or my friendships. Help me to express my opinions in love and not anger. Help me to be “quick to listen, slow to speak and slow to become angry” (James 1: 19). Help me to remain unified with my fellow believers in the essential truths of our faith.

I pray that Christians throughout America would carefully consider ALL of the issues at stake in this election, and that You would provide wisdom to guide and direct their decision making.

Amen.
Posted by Earl MacDonald at 3:30 PM No comments:

Here's a fun clip featuring Rob McConnell's writing for tentet.  This arrangement of "Like Someone In Love" is one of the pieces I am preparing this semester with the University of Connecticut Jazz Ensemble.  Our concert is on Nov. 6th at von der Mehden Recital Hall.


Note: This is not Rob's regular, Toronto-based ensemble.  These are primarily New York musicians, assembled to perform at the 2004 New York Brass Conference, at Purchase College, where Rob was honored.  The roster is: Tim Ries and Ted Nash on tenor sax; Lawrence Feldman on alto sax; Bob Milikan and Tony Kadleck on trumpet; Jim Pugh on trombone; Chip Jackson on bass; Kenny Ascher on piano and Dennis Mackrel on drums. It's nice to see Rob smiling during Ted Nash's tenor solo.

To contrast this performance, here is a performance by Joey Sellers' Jazz Aggregation.  I recognize both Wayne Bergeron and Ron Stout playing trumpet in the back row.  I am hoping to feature Joey's music with my UConn band in the not too distant future.  It deserves to be heard!

Posted by Earl MacDonald at 1:00 PM No comments:

I have become a huge fan of "little big bands."  They typically range in size between nine and twelve instrumentalists, which gives an arranger the best of both words: the subtleties of a combo and the robust power of a full jazz orchestra.  I use this format both with my professional band, the Hartford Jazz Society's New Directions Ensemble and with the UConn Jazz Ensemble, which I direct.

Working with a smaller-sized group (in comparison to the typical 17-piece big band) not only makes sense financially, it facilitates instruction in improvisation and musical interaction within university ensemble rehearsals, and makes the band more selective/elite.

Over the past decade I have been exposed to a wide variety of music written for the "pocket big band".  I prepare the music of a single composer/arranger each semester with my university students.  It has been fun to compare and contrast the writing styles of many different arrangers.  This semester we are focusing on the music of Rob McConnell's 10tet.

Here is a list comparing the instrumentation used by several arrangers for little big band.  I found it insightful to see the subtle differences between the groups. 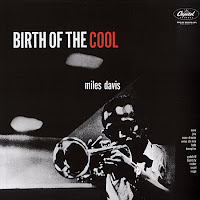 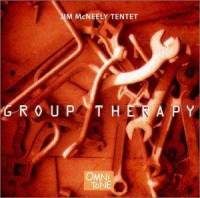 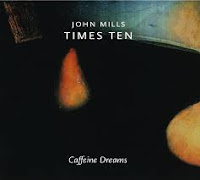 * both Nathan Parker Smith's 10tet and my band, the Hartford Jazz Society's New Directions Ensemble modeled our instrumentation after Jim McNeely's tentet.  I chose not to incorporate woodwind doubles, and it has simplified my life immeasurably.

If you know of any similar little big bands, please let me know by leaving a comment below.  I am always looking for exciting new music to spark my imagination and to program with the UConn Jazz Ensemble.

This video of Bob Brookmeyer rehearsing the Vanguard Jazz Orchestra is nothing short of pure gold.  I can't think of another composer who could stand in front of this motley crew and command such respect.  I appreciate his manner when correcting and teaching this seasoned group of professionals.  The portion starting at 0:21:22 and ending at about 0:23:15 is a good example of what I mean.  Enjoy!

Posted by Earl MacDonald at 10:07 AM No comments:

If you have been following my current blogging series (about writing a big band arrangement for Tyler Hornby), you may be wondering where I have been for the past week.  Truth be told, I have been hunkering down and trying to get this piece finished.  I have my own recording project at the beginning of next month, so I'd like to get this project wrapped up ASAP, get my piano chops in shape, and fine tune my own music.

I found the following YouTube video recording of Tyler playing "Dig In Buddy", the piece I am arranging.  It features Toronto-based pianist/brainiac David Braid along with Tyler's very capable band from Alberta.

Braid sure is an inventive player!  Not many pianists are daring enough to start a solo with the left hand only.  His ideas are clever and well-organized.  I really enjoyed this performance, and was impressed by the whole band.  It is nice to see jazz played on this high level in western Canada.

If I were to express one criticism, it would be that the performance lacked a certain "fire" or unabashed spiritedness.  It was perhaps too polite and restrained.  During the trombone solo it started to go somewhere, but it still felt like the band had yet to break a sweat.  I had hoped that guitarist, Jim Head would kick it into high gear, but unfortunately, he didn't partake in the festivities.

One of the key roles of an arranger is to steer soloists.  Obviously David Braid would have played very differently if he was "competing" with horn interjections, or if layers of instruments were added part way through his solo, thereby forcing him to build his intensity.  For this reason, Bob Brookmeyer referred to backgrounds as "solo enhancements".  I love that label.

Speaking of Brookmeyer, I often think about some of the statements he made on his web site and in interviews before his passing. He said a lot about the role of soloists within a big band and their relationship to the composition.  I took to heart his thought that the arranger shouldn't turn over control to the soloist until he has literally no other option.  Even then, I like keeping my finger in the mix, playing the role of a manipulator, by "stirring things up" when I feel the whim, or need to shape a passage in certain way.

It will be after the four minute mark in my arrangement that a soloist (other than drums) is allowed to cut loose.  The drum solo after the initial melody statement is carefully scripted, interacting with robust, energetic ensemble hits.  Sketches for this passage appeared in my last post.  The solo then continues into an elongated, rhythmically quirky restatement of the melody, where drums play exuberant fills in all the "holes".  Here is a taste: 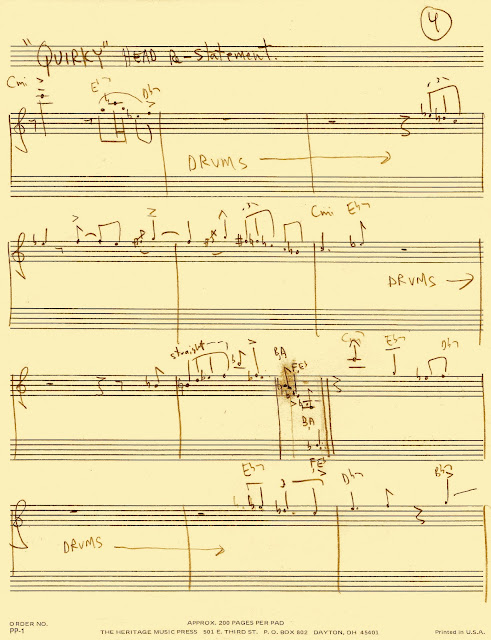 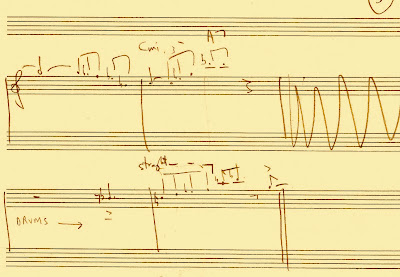 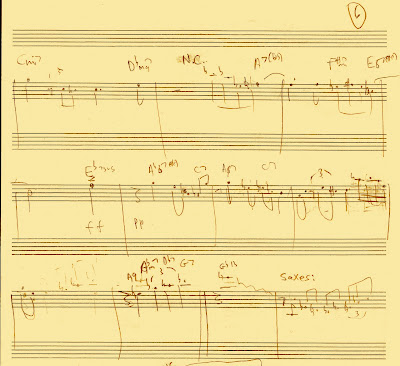 Now I'm completing a saxophone soli that builds over two choruses. The improvising horn soloists will need to demonstrate patience for just a little while longer.