The premier performance of my first orchestral piece, "Dolphy Dance", took place last night at von der Mehden Recital Hall, with the University of Connecticut Symphony Orchestra.  I conducted, which in itself was a thrill.

Here is a video from the concert, followed by my program notes:

Last summer, I ran a Kickstarter campaign to fund the manufacturing of my latest compact disc. Commissioning “a tune” was offered as an incentive. My friend Paul Gruhn ordered a song as a surprise birthday present for his wife Donna, but with the caveat that in couldn’t be “too jazzy”. Apparently she hates jazz. For a jazz composer, this presented quite a problem, but we eventually decided upon something in the salsa style.

After two weeks of listening to Eddie Palmieri, Tito Puente and Mario Bauza recordings, I sat down and wrote a relatively simple piece, trying to adhere closely to the style. Paul requested the title “Donnamite”, which was his wife’s nickname as a stock car racer several years ago. The surprise debut took place on the outdoor patio of Willimantic’s Cafémantic, and Donna was ecstatically pleased.

In hindsight, perhaps I should have let the story end there --- “happily ever after”. Instead, I decided to tinker with the piece. After immersing myself in salsa recordings, I started questioning the importance of melody to the genre. Would it still be “danceable” if the clavé rhythmic pattern was retained, but the predictable melodies were replaced with more complex linear material? Similarly, what if the harmonies were altered; could it still pass as authentic Afro-Cuban music?

As I experimented with taking the melody and harmony further left of center, I began imagining what jazz saxophonist Eric Dolphy might have sounded like had he been featured with a salsa band around 1960. Out of this vision, “Dolphy Dance” was born.

I later added a musical prologue, in the spirit of an orchestral ritornello. It uses the same linear and harmonic material, presented in triple meter, while drawing upon the orchestra’s vast color palette.

Graduating senior, Colin Walters will play the role of Eric Dolphy in tonight’s performance. During his time at UCONN, Colin has worked diligently and his musical development has been significant. Featuring him as a soloist with the orchestra is my graduation present to this fine young man. 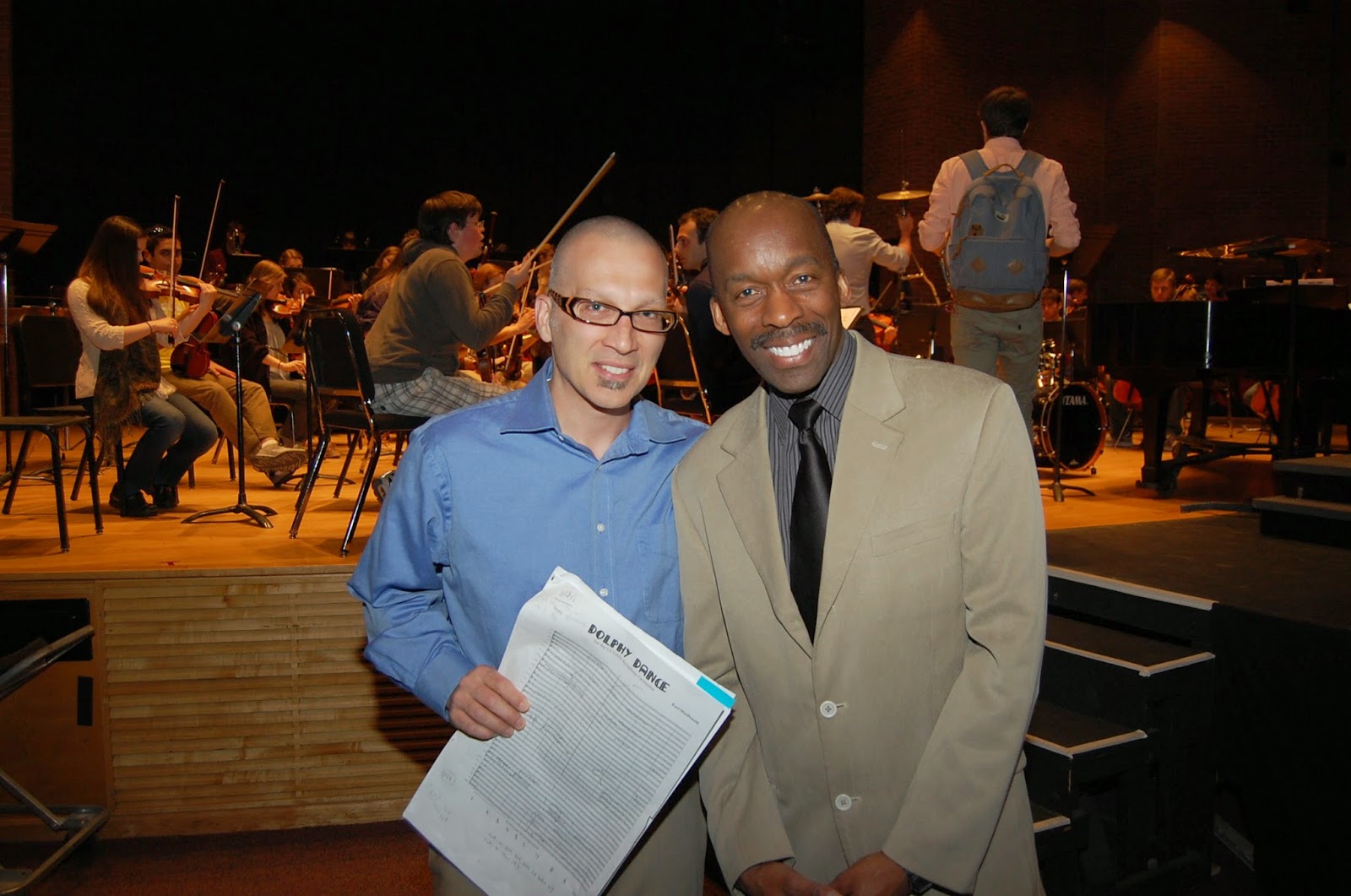 Lastly, I wish to thank Maestro Harvey Felder. It was Professor Felder who instigated this collaboration, and persisted when I said “no” initially. He gave me complete freedom to write whatever I wanted, to be myself, and to write jazz, so as to expose the orchestral students to the genre’s authentic, stylistic nuances. This and his inviting me to conduct, reveal his selfless pedagogical fervor. What he accomplished in the orchestra’s initial rehearsals of the piece, prior to handing me the reigns, established a solid foundation upon which I could build.