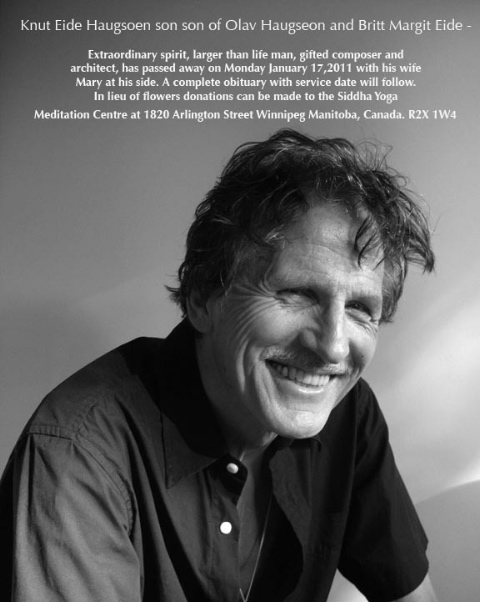 I was saddened this week to learn of Knut Haugsoen's passing.  Knut was an inspired and thoughtful jazz pianist & composer who's music and creative spirit strongly influenced me during my formative years in Winnipeg.  On many occasions I went to hear his band, Virkrama perform at the Franco-Manitoban Cultural Center and the Winnipeg Art Gallery.  At Knut's performances you could always count on hearing cohesive, rehearsed sets of clever, highly-original music.  Musicians often commented that you could tell he had a background in architecture because of the interesting formal structures within his pieces.

I believe Knut was the first musician to turn me on to the concept of reharmonizing American Songbook standards.  His rendition of Cole Porter's "Love for Sale" is especially memorable.

Knut's first album, "Hands On", was engineered by Jan Erik Kongshuag, who recorded many albums for ECM records.  After reading the liner notes of this disc I started to "dig around" and learn more about the ECM catalog and its extraordinary depth and importance in the realm of creative, improvised music. One of Knut's frequent local collaborators, bassist Steve Hamilton, was especially helpful to this end.

Whenever I played in Winnipeg, Knut and his wife Mary were often in the audience.  He was always very encouraging and eager to discuss my latest compositional and improvisational approaches.  I truly enjoyed our conversations about music.  Its hard to believe he's gone.

Thanks Knut for your music, creative spirit, friendship and encouragement.  You will be missed.
Posted by Earl MacDonald at 11:47 PM No comments:

The Canadian jazz journalist and radio DJ, Ray Alexander was kind enough to include my CD in his top 10 list of jazz albums for 2010.  Thanks Ray!

You can hear Ray's radio show online and via podcast at: http://www.umfm.com/