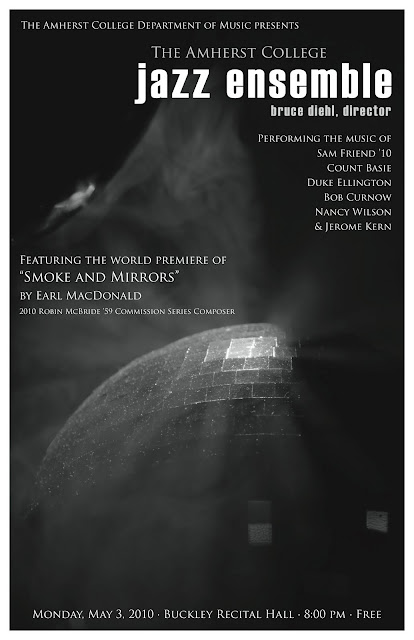 My latest composition, Smoke and Mirrors, will receive its premier performance on Monday, May 3rd at Amherst College.  The piece was commissioned by the Amherst College Jazz Ensemble as a part of the Robin McBride '59 Commission Series.  I will work with the band on Sunday evening and will also make a presentation on Monday afternoon at 2 p.m. to describe my compositional process.  It will be a fun way to begin the week!
Posted by Earl MacDonald at 7:26 AM No comments:

Congratulations to my former student, Jimmy Macbride, for his latest DownBeat Student Music Award in the high school composition category.  Jimmy is completing his freshman year at the Julliard School of Music, where he studies with Carl Allen. 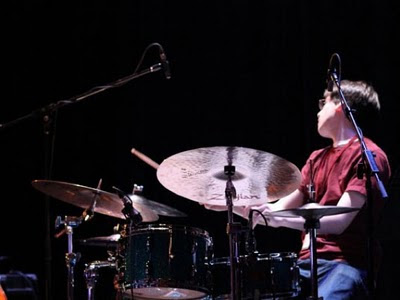 Posted by Earl MacDonald at 1:42 PM No comments: 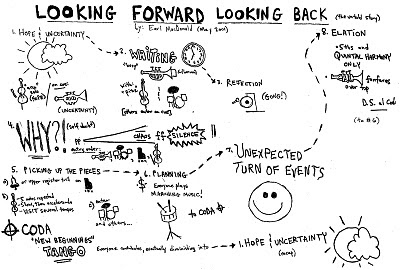 Earlier this month I made several presentations at the Connecticut Music Educator's Association Conference in Hartford.  One of these presentations was entitled "Footloose & Fancy Free" and dealt with using structured games and graphically notated scores as an entry point for teaching beginner improvisers.  I have posted a recording of the above piece, more of my aleatoric / graphic scores, as well as the PowerPoint slides from my other presentations ("Makin' the Changes" and "Overcoming the Rhythm Section Blues") on my web site.
Posted by Earl MacDonald at 9:13 PM No comments:

I am a musician and not a reviewer, but all week long I have been mulling over my response to the “One For All” concert I attended last Friday night at the Wadsworth Atheneum in Hartford.
The guys in “One For All” certainly play well.  Their solos were very impressive.  It just seems strange to me that they have collectively decided to rigidly imitate Art Blakey’s Jazz Messengers (specifically from the 1961 – 64 era).  One of their song titles, “Our Father, Who Art Blakey” states this point clearer than I could articulate in several paragraphs.  As much as I love that music, it happened almost 50 years ago.  Isn’t it time to move on? 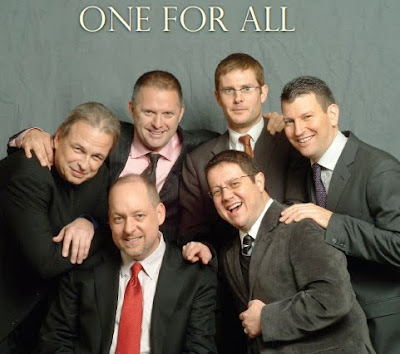 In an educational setting I think it is imperative that students study the music from past generations.  I wholeheartedly subscribe to Clark Terry’s catchphrase “Imitate, Assimilate, Innovate”.   In fact, I insist that all my undergraduate students thoroughly study the music played by Blakey’s bands (among many others) --- but it doesn’t end there.  The members of “One for All” are all over the age of 40.  At this point shouldn’t they be past the “imitate” and “assimilate” phases and be onto innovation?
Historically, hasn’t jazz always been synonymous with innovation, experimentation and “pushing the envelope”?  Has jazz really become “museum music” like its classical counterpart?  Have we reached a point where jazz must adhere to strict performance practice guidelines so that there is no stylistic deviation from the designated era a band is copying?
Philosophically, I see no difference between “One For All” playing in the style of the Jazz Messengers and the Jazz at Lincoln Center Orchestra playing Ellington and Fletcher Henderson charts.  It’s bass ackwards.  Sure, “One For All” plays original compositions, but it is apparent that the composers are pretending Art is still with us and it is still 1962.  It would perhaps be less confusing to me if they would fully embrace their identity as an Art Blakey “ghost band” and simply play the music of Freddie Hubbard, Wayne Shorter and Curtis Fuller.
Jazz is art music.  Artistic imitations don’t interest me.   If I want to see cubist paintings, I’ll seek out work by Picasso or Georges Braque, not some present-day mimic.  As well as they play; I’d almost rather stay home and listen to my “Buhaina’s Delight”, “Caravan” and “Free For All” albums.  I think we need originals in an era where jazz is struggling to find and maintain an audience.
Does anyone else agree or am I over-reacting?  Do ghost bands and rigid performance practice guidelines have a place in today’s jazz scene?
Posted by Earl MacDonald at 10:09 PM 4 comments:

By Chuck Obuchowski, Special To The Courant

The UConn Jazz 10tet, directed by Earl MacDonald, began the evening with an exciting, all-too-brief "sneak preview" of material that will be officially premiered August 2 in Hartford's Bushnell Park.

That occasion will mark the debut of the HJS New Directions Ensemble, with MacDonald as pianist and composer in residence. Friday's performance succeeded on its own terms, however, displaying the ample talents of ten University of Connecticut student improvisers. 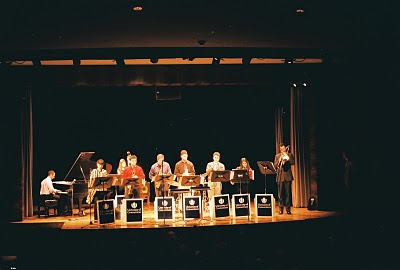 Most of the material was written or arranged by MacDonald, but the students executed the scores brilliantly, offering a sophisticated update of "Birth of the Cool" instrumentation and concepts. Also included was a fascinating arrangement of Thelonious Monk's "Nutty" by Jon Shelly, the group's trombonist.

The UConn Jazz 10tet, under Earl MacDonald's direction, will perform Tuesday, April 13, 8 p.m. at the University of Connecticut's Von Der Mehden Recital Hall, 875 Coventry Rd., Storrs. Details at www.sfa.uconn.edu/vdm and 860-486-4226.
Posted by Earl MacDonald at 10:22 AM No comments:

Liner notes, production credits and reviews for my newly released CD, “re:Visions” are now posted on my web site: www.earlmacdonald.com 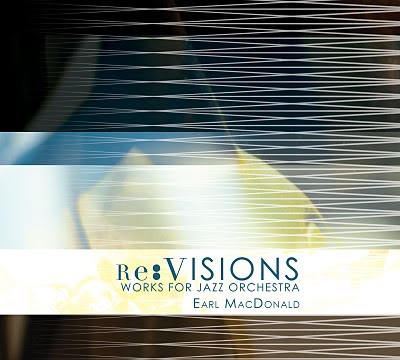 The disc is available for purchase at CDBaby.com and iTunes.
Posted by Earl MacDonald at 12:00 PM No comments: