Earlier this month I spent a very enjoyable weekend at Amherst College in Massachusetts working with the Amherst College Jazz Ensemble.  As a part of the Robin McBride '59 Commission Series, I was asked to write a piece for the ensemble.  They gave me complete freedom to write whatever I wanted.  I wrote a rather dark, lengthy piece entitled "Smoke and Mirrors".
The director, Bruce Diehl did a terrific job preparing the ensemble.  I conducted during the dress rehearsal and had a chance do some "fine tuning" with regards to interpretive aspects of the piece.  The band responded very well.  This part of the process is always the most fun for me. 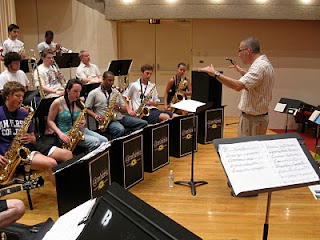 The following afternoon, I gave a lecture to the music theory class, discussing my compositional process.  I talked about idea generation techniques (making lists), 12-tone theory, and shared details of the personal, real life scenario which prompted the piece.  They asked some terrific questions. 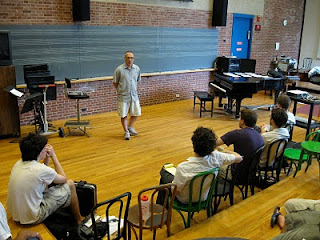 The song featured Alison Rogers on flugelhorn.  At the rehearsal she told me that it was at a February 1999 Maynard Ferguson concert in Coral Gables, FL that she decided music would be one of her lifelong passions.  I was the pianist in the band that night.  What a small world!  Here is a shot of Alison performing my "Smoke and Mirrors" composition on May 3rd, in Amherst College's Buckley Recital Hall. 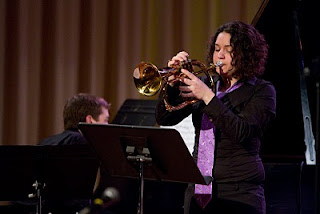 And here I am, after the concert, posing with Robin McBride, for whom the commission is named, and Bruce Diehl, the director of the Amherst College Jazz Ensemble.  We are standing next to the plaque which displays the names of all of the recipient composers of the commissioning series.  Dave Rivello, the composer who's work I plan to feature with the UConn Jazz Ensemble next spring, was listed above me. The jazz world just gets smaller every day. 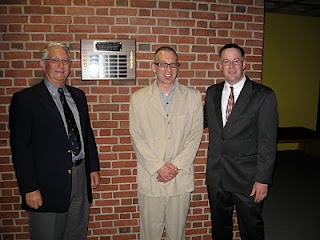 Posted by Earl MacDonald at 9:54 PM No comments:

With the school year behind me, I now have some time for personal reflection and planning. In my evaluation of the past academic year, I have been considering what went right, what went wrong, what to continue, and what to stop doing, as I chart my course for the future.

I recently made the decision to stop teaching private lessons outside of the university. I have taught privately for 20+ years now, and it is time for a change. At this stage in life, I really feel the need to pull back, and limit my focus to family, and my own musical pursuits. I specifically want to devote more time and thought to composition and arranging. 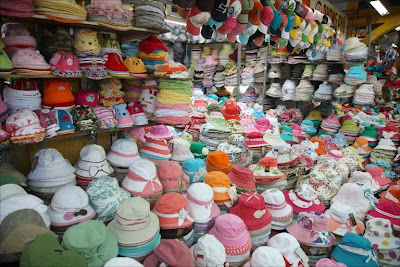 I take great pride in the accomplishments of the many talented, young musicians I taught over the years, on weekends --- Will Bonness, Bryn Roberts, Paul Schrofel, Aaron Nebbia, Jimmy and Alma Macbride, and many others. It was a real treat to see them progress from week to week and eagerly devour the material I shared. It is very gratifying to see them all doing so well.

Fear not! This decision does not mean that my passion for jazz education has waned. In fact, I have been considering ways in which I can share material more effectively, with a wider audience. When time allows, I plan to post the many lesson handouts I have used in lessons, in the Jazz Educational Resources section of my web site.

Stay tuned, as more changes are ahead.
Posted by Earl MacDonald at 10:00 AM No comments:

Maynard Ferguson clinic (back in the old days...)

Keith Berry, the band director at Manchester High School (in Connecticut) just discovered this old photo of me with Maynard Ferguson.  It would have been taken at a clinic we gave, probably back in 1998 or 99.  Thanks Keith!  It brings back great memories. 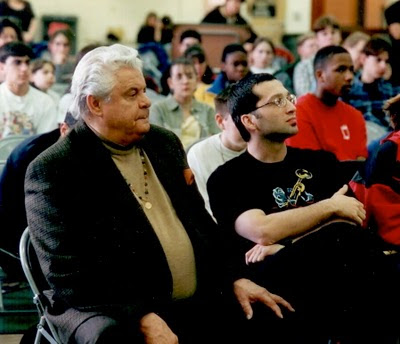 Posted by Earl MacDonald at 2:46 PM No comments: