I had absolutely no desire to play big band music back in 1993, when I began my jazz graduate studies at Rutgers University. I felt I had played enough Sammy Nestico and Bob Mintzer charts, and I was back in school solely to hone my piano chops under Kenny Barron's tutelage. I remember walking into my mandatory ensemble audition and requesting NOT to be placed in the big band. Mike Mossman, the ensemble's director countered, "But you don't know what music we're playing this semester. Have you heard Maria Schneider's band yet?"  I admitted I hadn't, to which he replied, "Go to Visiones on Monday night to check out her band, and then report back to me on Tuesday to let me know if you still have no interest in big band music."

That Monday night in September, 1993 my life was forever changed. I had no idea that a big band could be a such an effective vehicle for self expression, or that such a variety of orchestrational colors could come from just seventeen players. I bought Maria's Evanescence CD that evening, and was hooked; the course of my life took an unexpected turn.

One of my former UCONN jazz students, Matt Baum now works at the Jazz Standard night club in New York City, as executive assistant to the club's artistic director. He invited my wife and me to be his guests during one of Maria Schneider's tenth Anniversary Thanksgiving week performances at the Jazz Standard. We chose to attend the early set on Friday night, Nov. 28th.  In a word, the show was "brilliant".

They played the following material:

There aren't many bands in the world with such a stacked roster of soloists.  Every solo was jaw-droppingly awesome.  Describing highlights would be superfluous, as these players don't need my adjectives to affirm their validity.

I look forward to Maria's next CD.  It was recorded in August, is currently being mixed, and will be released on April 21st.  Seeing this timeline was a good lesson for me.  It is interesting to see how much carefully calculated planning goes into the release of her discs.  To learn more about her ArtistShare crowdfunding project, click on the link.

What a fun and inspiring evening.  I think I'll sharpen my pencils, roll up my sleeves, and get back to the business of writing my own big band music.  My creative batteries are recharged. Thanks Matt and Maria!


Posted by Earl MacDonald at 2:26 PM No comments:

Birth of the Cool

This semester, the UCONN Jazz Ensemble and I prepared the music from Miles Davis' "Birth of the Cool" album.  It was a thoroughly enjoyable undertaking. I witnessed considerable growth in the individual band members as they carefully studied the album and worked to replicate the stylistic nuances of the original players.
Here we are performing at the Co-Op Bookstore in Storrs Center on November 13th.

On his own initiative, the bari sax player learned Gerry Mulligan's recorded solo.

"Moon Dreams" may be my favorite of the album's twelve charts.  It is not surprising that a critic who heard Davis' nonet perform in 1948 said "the music sounds more like that of Maurice Ravel than it does like jazz... it is not really jazz."

I love how this music stemmed from musicians' discussions about the future of jazz and drew from contemporary classical music they had heard on recordings.

This performance took place earlier on Nov. 13th for the high school students at Norwich Free Academy. As a teacher, I am encouraged by the trumpet player's solo.  He is starting to incorporate some solid jazz vocabulary into his playing.  This wasn't happening a year ago. He's still working on execution at this tempo, but a year from now, if he continues on his current path, I believe he will be "a force to be reckoned with".

This is my second time preparing music from "the Birth of the Cool".  The first time (back in 2002,) I acquired the music directly from Gerry Mulligan's widow, Franca.  The charts were a mess and full of inconsistencies, which made rehearsals difficult.  This time around I bought the published, edited music from ejazzlines.com, which made for a much more pleasant experience.


Our final performance of the year will take place on Monday, December 1st at Black-eyed Sally's in Hartford.  The club is hosting a "College Night" where bands from UCONN, the Hartt School, WestConn and the Berklee College of Music will each play a set.  The evening will culminate with a collective jam session.

Posted by Earl MacDonald at 1:01 PM No comments:

On Friday evening I shared a brief eulogy honoring my former composition teacher, Jan Jarczyk.  Jan passed away in August.  His family organized a series of concerts in the cities where he lived and worked, to celebrate his life and music.  This was the third stop, at the Lilypad in Cambridge, MA, following gatherings in Montreal and Toronto.

I was one of three invited speakers, along with drummer Marcello Pellitteri and Jan's daughter, Amaryllis, who read comments by Berklee emeritus professor, Ken Pullig.  Our remarks were interspersed between musical selections performed by a stellar quintet led by tenor saxophonists Jerry Bergonzi and George Garzone. 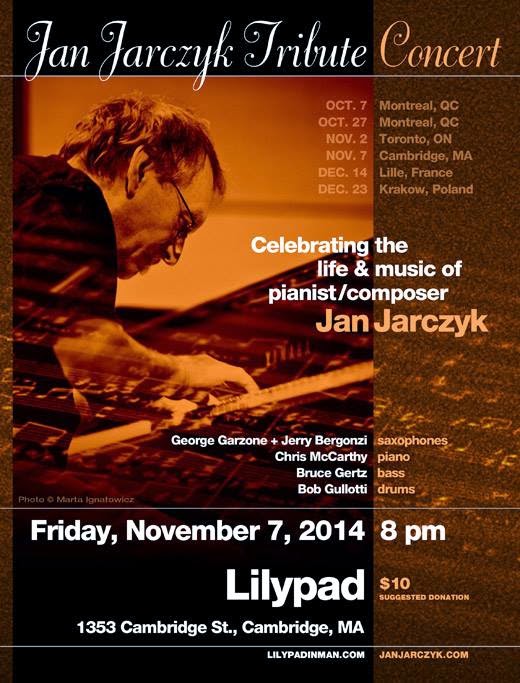 I chucked during a story shared by Pellitteri.  Three times he turned in a composition assignment to Jan only to be handed the piece back with the advice, "You can do better."  In my own experience I can attest that Jan certainly did possess the uncanny ability to make us reach to achieve higher levels.

When I spoke, I alluded to Jan's legacy through his teaching and example:  McGill was a special place in the early 90s, because students came from all across Canada to study there.  All regions of the country were represented.  When we graduated, some went back to their home provinces, some stayed in Montreal or went to Toronto or Vancouver, some moved to Europe, and others tried their hand at New York.  Jan's spirit, music and teaching impacted a lot of people, and I hear it in Canadian jazz.  When people say that Canadian jazz has a unique sound of its own, I don't think its a tremendous stretch to say that sound can be traced back to Jan.  I'm not saying he produced musical clones of himself.  He didn't.  He did, however, push us to dive deep into the exploration of harmony, melody and the development of ideas.  I hear Jan in the music of Josh Ranger, Joel Miller, John Stetch, Mike Downes, Bryn Roberts, Jim Head, Tilden Webb and many others.  He's there.

Jan arrived at McGill half way through my undergraduate studies.  If I remember correctly, there were only two full-time jazz faculty before he was hired.  One was a big band expert with a penchant for Sammy Nestico; the other was a "hard bopper" influenced by Kenny Dorham, Lee Morgan and Hank Mobley.  Jan instantly flipped the scene on it's head with improvised solo recitals on piano or pipe organ(!), in addition to his vast catalog of sophisticated, quirky compositions.  He opened our ears to other possibilities, and suddenly it "became cool" to admit to liking Jan Gabarek, Keith Jarrett and other cutting-edge improvisers.  Frequently groups of us would make the trek to hear Jan at Claudio's, a loft jazz club/restaurant in Old Montreal.

But when I think of Jan, I smile thinking of his fun personality as much as I think about his music.  I played a trick on him once, which I outline in the introduction of the following tune, which was performed a couple of weeks ago at a UCONN faculty showcase concert.


My one disappointment in the evening was how little of Jan's music was performed.  I was really looking forward to hearing his tunes played live, but I think they only did two of his pieces:  an Ornette (Coleman)-like melody followed by free improv and "There Is Always Time".  (They may have done one other.)  I heard that in Toronto his tunes were played exclusively --- as they should have been.

I wish I could have also attended the gatherings in Montreal and Toronto.  It would have been nice to hear my Canadian friends share their memories.  Since his passing, I have had several opportunities to chat with former classmates about him, but until Friday night I hadn't made the complete emotional connection that he is gone.  Visiting with Jan's wife and daughter was especially touching.  It was a bittersweet evening that I will treasure, along with my other memories of Jan.

Posted by Earl MacDonald at 3:58 PM No comments: