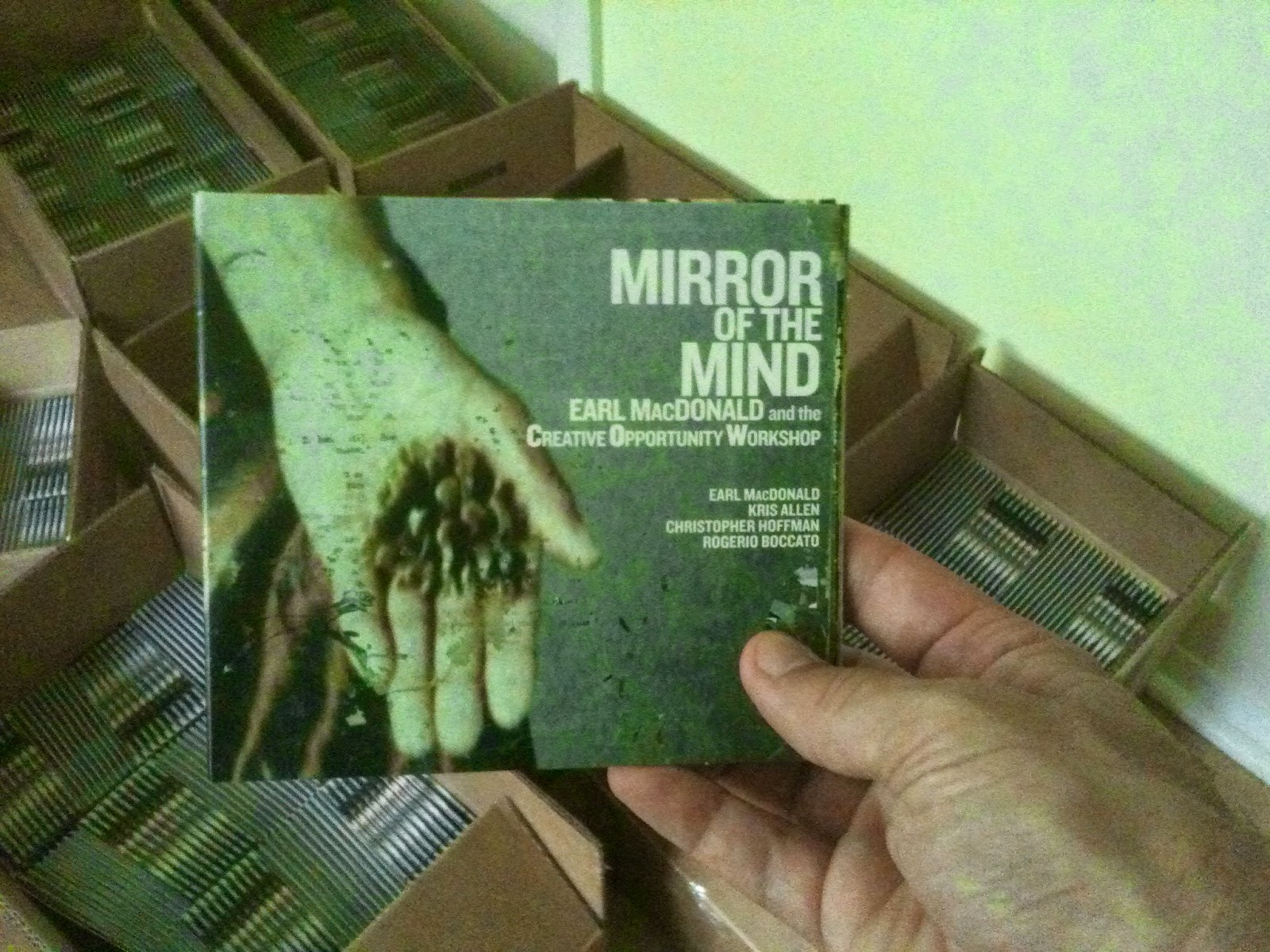 This time last year, boxes of my new CD had just arrived and I was busily mailing copies to reviewers.  In truth, hundreds of copies were mailed along with a press release I had written (and a personal note to each reviewer).

In all, this yielded 13 written reviews (to my knowledge), which isn't bad considering how many musicians are vying for critical attention with new discs.  Nevertheless, I hope never again to act as my own publicist; the whole process took a serious toll on my soul.  I hope to delegate promotion to the pros from now onwards.

This week I received notification that Cadence Magazine will publish the following review in their October Issue.  This was a nice surprise when I thought the lifespan of this disc's promotion had lapsed.  Here's the review:


MIRROR OF THE MIND/ A THOUSAND MEMORIES/ BENEATH/ BLACKBIRD/ BIDWELL CRONIES/ DISILLUSIONMENT/ MILES APART/ IT WAS WHISPERED/ A PRIORI PERCEPTION/ WHERE THINKING LEAVES OFF/ I NEVER TOLD YOU/ BOTTOM FEEDERS; 51:47.

Pianist Earl MacDonald has assembled an interesting cast of characters for the Creative Opportunity Workshop on this rewarding and largely enjoyable release. The assertive and hard-swinging saxophonist Kris Allen has recorded with fellow reedmen Chris Bryars and Loren Stillman and as a member of the Illinois Jacquet orchestra. Cellist Christopher Hoffman has worked with Henry Threadgill’s Zooid and Matt Holman’s Diversion Ensemble, and the exceptionally tasty drummer Rogerio Boccato has been heard with John Patitucci, David Binney, and the Curtis Brothers. The use of cello instead of bass pushes the band a little outside of a typical post-bop mindset. The different range of the instrument moves the rest of the group to a higher state of mindfulness to accommodate it. And Hoffman is adept at shifting from the usual function of bass in a band to become a forceful solo voice, which in turn gives MacDonald more to work with. Most of the tunes are originals by MacDonald. The title tune starts things off with a mid-tempo groover, with Allen on alto. From layers of carefully organized melodic patterns, the arrangement carves space for convincing solos by Allen, Hoffman and Allen again to take it out. A repeated piano figure is at the core of the first theme of “A Thousand Memories,” followed by a release that gives MacDonald his first solo of the date. His piano skips and dances attractively, setting the stage for a gruff tenor solo by Allen. A jittery Hoffman playing arco glides in for a solo, then slips back into the ensemble. It’s all over by 3:33, a refreshing change from sessions where everything seems to last too long. MacDonald makes a point of keeping the songs under control; only “Where Thinking Leaves Off” exceeds the six-minute mark. “Beneath” is funky and stark at first, opens up quickly into mid-tempo groove featuring Allen on a fine-sounding soprano. He seems to be equally at home on all three of his horns, widening the band’s range even more. While you might not think of the Beatles’ “Blackbird” as a useful vehicle for improvisation, MacDonald’s reharmonization and tempo shifts work quite well and features a warm soprano sax solo by Allen, a bouncy piano break by the pianist, and a typically spry solo by Hoffman. That’s one of two covers on the disc. The other is the seldom-played “I Never Told You,” by Johnny Mandel and Arthur Hamilton. Premiered on a Quincy Jones orchestra date in 1969, it’s a lovely dark melody. MacDonald’s arrangement puts Hoffman’s sweet cello out front to excellent effect for one of the highlights of the session. I was also quite taken with “Disillusionment,” with its twisty melody and wide-open solos by a snake-charming Allen and Hoffman. The fractured melody of “It Was Whispered” makes for another standout performance. Boccato sounds great on this one, nailing every sharp twist and turn in the atomized, out of tempo middle section. Certainly the weirdest passage on the disc is the theatrical laughter that greets the saxophone solo on “Where Thinking Leaves Off,” followed by a section of random noises and squeaks plus the odd grunt or two. Eventually, they settle into a groove that breaks down quickly, only to reestablish itself before dissipating into a series of overlapping solo statements that converge into a crescendo. At least there’s no more laughing. The album ends with the straight-ahead upbeat groove of “Bottom Feeders,” a satisfyingly bluesy way to wrap things up. A playful MacDonald is followed by Allen, in a mood to explore the full range of his alto while Boccato and Hoffman keep pace. It’s the kind of tune designed to put a smile on your face and leave the listener with a good feeling. At least that’s the effect it had on me. This Creative Opportunity Workshop is well worth hearing.
– Stuart Kremsky

Mirror of the Mind can be purchased at the UCONN Co-Op Bookstore at Storrs Center and through CD Baby, iTunes, and Amazon.

http://www.cdbaby.com/cd/earlmacdonald3
Posted by Earl MacDonald at 8:31 PM No comments: