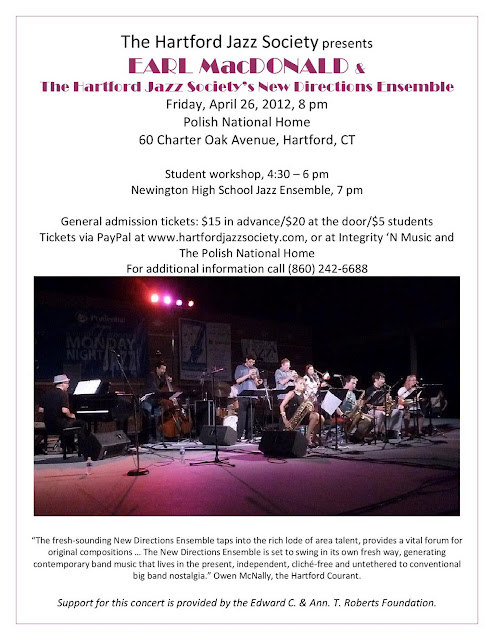 Here is the stellar roster which will be joining me for Friday's concert and student workshop in Hartford:

On April 26th, at 8 p.m., at the Polish National Home, 60 Charter Oak Avenue, Hartford, the New Directions Ensemble will perform under the direction of musician, arranger, composer, and educator, Earl MacDonald with the sponsorship of the Hartford Jazz Society. This Ensemble debuted in 2010 as the brainchild of Earl and co-director, Kris Allen.

EM: To be absolutely candid, I felt the jazz society was stagnating and needed to forge into a new direction if it wanted to be effective in expanding the audience for jazz in Hartford. I thought an active performing ensemble under the banner of the Hartford Jazz Society would help to cultivate a vibrant public image for the organization. It would give the HJS a very prominent, public face. By design, the group’s mandate is to assist in accomplishing the aims and purposes of the HJS – especially with relation to education and audience development. I pitched the idea to the board of directors and they embraced it. Together I hope we can do great things for jazz and the Greater Hartford community.

GF: I believe the Society would like to foster jazz education at the High School level, as well as at the university level. Is that something you might be involved in?

EM: Absolutely! As a part of this concert at the Polish National Home, we will be giving a free workshop for high school and university students from 4:30 – 6:00 p.m. We hope to do much more of this kind of activity. Last year we gave a concert and worked with students at Glastonbury High School.

My plan for this ensemble has many layers. Phase one was to get music written and get the band up and running. Now that this has been accomplished, I plan to shift my focus to outreach and educational activities where we can expose students and younger audiences to our music. The third phase is to get the band properly recorded, so that we can expand our reach, as well as having proper examples to submit for grant proposals that would assist in accomplishing and fully realizing our educational, compositional and performance goals.

GF: As an educator (Earl is Director of Jazz Studies at UConn) you have said that you hope to inspire students to "reach their highest potential", rather than just passing knowledge on to them. I have found that this way of teaching often opens up a whole new world to students and fosters curiosity. Was there a mentor or someone in your past that inspired you? I ask because you seem to always be striving and constantly educating yourself.

EM: I’ve had many great teachers over the years --- Kenny Barron, Fred Hersch, Jim McNeely, Michael Abene, Michael Mossman etc. Each of them had something special and unique to share. I choose role models who are successful, evolving artists and people, who typically aren’t content with the status quo. In this way, trumpeter Dave Douglas stands out as someone who has inspired and influenced my thinking. I like that he has so many, varied ensembles functioning as his laboratories for experimentation and self expression.

EM: Strangely, my lessons with Charlie Banacos were via correspondence. I never met him face to face. We sent a cassette tape back and forth to one another through the mail. It was a unique experience and he gave me much forthright, constructive criticism that I value and appreciate to this day. My lessons were limited to one improvisational concept, so I didn’t get to experience his whole ear training method.

I do value ear training. As an undergraduate student, I didn’t take it too seriously, but later I worked very hard to develop my ear. I made tapes for myself of different chord voicings so that I could identify specific tensions and alterations on chords. Years ago, while teaching as a sabbatical replacement in Nova Scotia, I had to teach ear training and sight singing. During that year, my skills grew immeasurably, as I wouldn’t allow myself to falter in front of a class.

GF: As Musical Director for Maynard Ferguson's Big Bop Nouveau band you traveled extensively. You've also recorded and performed with your sextet, quintet, trio, and as a solo artist. Do you find that you prefer teaching over performing? You've been called "an outstanding arranger"; how does it compare to creating and performing your own original compositions?

EM: My professional experiences inform and equip my teaching, and my teaching informs and equips my playing. They work together. I love teaching and seeing my students growing and accomplishing. As an example, seeing Jimmy Macbride do so well --- graduating from Julliard, winning competitions and playing great --- makes me feel very proud. But, I no longer teach privately outside of UConn. There aren’t enough hours in a day for this professor, father, husband, pianist, composer and arranger. Those are a lot of hats to wear, and “dropping the ball” in any of those areas isn’t an option. Achieving the proper balance is always the challenge.

I chose a career in university teaching because it is enjoyable, gratifying work, it pays the bills and supports my family, it allows me to live a relatively comfortable lifestyle, and I can be selective about what music I play. I thoroughly enjoy teaching, but I’d be lying if I said I prefer it to performing and creating music of my own. There’s truth to the joke “What would a jazz musician do if he won the lotto? He’d work until the money ran out.” If I won the lottery, I’d be playing and composing full-time. But, that doesn’t mean I haven’t found satisfaction in the route I have chosen to take.

As for the second question, arranging and composition are the same process for me. Whether it is one of my pieces that needs to be developed, or someone else’s, it doesn’t really matter. I try to put my own stamp on it, to make it uniquely my own.

GF: Being originally from Canada, was it pursuing your Masters at Rutgers that brought you to the US?

EM: Initially, yes, but I returned to Canada after completing my Masters degree. Like most jazz musicians, there was a period when I aspired to live and work in New York City. But when I did the math, it didn’t add up. Gigs paid next to nothing and rent was through the roof. I thought I’d have better luck in Toronto. Three times I planned to move to Toronto, but other opportunities presented themselves each time. The piano teacher at St. Francis Xavier University in Nova Scotia was on sabbatical, so they hired me to fill in for him after my graduation from Rutgers. The following year I took a similar one-year position in Bowling Green, Ohio at BGSU before accepting the gig with Maynard Ferguson’s band. While touring with Maynard I saw an online ad posted for my current position at UConn, and applied. That was 14 years ago.

GF: When is your next sabbatical and what plans do you have?

EM: I will be on sabbatical in the fall and have made arrangements to study film scoring. I look forward to doing some more consistent piano practicing too.

On my last sabbatical, I joined the BMI Jazz Composer’s Workshop in New York City. It was a great experience where I benefitted from the feedback of my peers and the workshop leaders, Jim McNeely and Mike Holober. I am tempted to rejoin. We’ll see. I need to be careful not to overcommit myself.

GF: We are truly blessed in the Hartford area with talented and dedicated musicians. Is it because we have some good music schools in the area and a proximity to New York or might there be some other reason?

EM: I believe this results from a culmination of factors: 1) the close proximity to NYC and the affordability/desirability to live here compared to the city. 2) some excellent school band programs, 3) the affluence of West Hartford residents who’s children have access to lessons, top instruments, concerts, etc. 4) excellent musician educators who have “given back” to their communities --- Jackie McLean, Paul Brown, Dave Santoro, Steve Davis, Kris Allen, John Mastroianni, etc. 5) the Hartford Jazz Society has played a role by bringing great musicians to town to perform. Coming from Winnipeg, I didn’t experience a live concert by a truly renowned jazz musician until my early 20s. I only heard them on recordings. That’s not the case here.

GF: In an online interview, I heard you mention Dizzy Gillespie's influence in the birth of Latin Jazz. I read that he was in Cuba and was influenced by Cuban musicians. Having been there I noticed how they take their music very seriously and proudly. It was a joy to see. Anything you'd like to add on this important part of Latin Jazz history?

EM: Someday, I too would like to go to Cuba to experience the infectious joy, pride and studious nature of the musicians there.

As much as I love Latin Jazz, what I love even more is the idea of fusing jazz with different styles to create something new and keep the music interesting and vital. I see and hear this happening now with electronic dance grooves in addition to the obvious hybrids with ethnic musics. It’s very exciting and prevents the music from becoming inbred and dull.

GF: Thank you Earl for your time and look forward to seeing you on the 26th. Hear there will be some new arrangement and/or compositions the ensemble will be performing.

EM: I just finished a big band arrangement for an upcoming recording by Canadian drummer, Tyler Hornby. I will be adapting this piece for the 10-piece instrumentation. Also, since my last Hartford performance with the band, I have been fully engaged in a collaborative project with visual artist, Deborah Dancy. Much new music has resulted, some of which will be incorporated into our show. I also continue to tweak the music already in our repertoire, working out any little kinks and making slight improvements here and there. It’s an ongoing process for me.

So in wrapping up, needless to say this is a concert not to be missed. Earl MacDonald has received so many awards. So much more could be said about him and his prolific career. His website is www.earlmacdonald.com

Posted by Earl MacDonald at 4:30 PM No comments:

The UConn Jazz Combos perform tomorrow night, April 11th.  We have moved the venue to Lu's Cafe, a much more intimate and relaxed space than the formal, 500-seat recital hall.  Lu's is located on the basement level of the Family Studies building.  The music starts at 8 p.m.  There is no cover charge, but donations are accepted towards our guest artist fund. 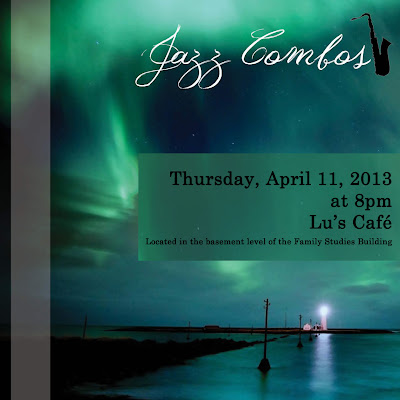 A jam session will follow the formal program
Posted by Earl MacDonald at 2:00 PM No comments: