As I mentioned in my last post, one of my summer goals is to transcribe all of Herbie Hancock's solos from his "Takin' Off" record, from 1962.  For years I've had a hang-up about studying Herbie's playing in depth.  I've felt intimidated and ill-equipped for the task.  Anyways, it's time to overcome these feelings of inadequacy.  By starting with Herbie's first solo album, maybe I can work my way up to being able to transcribe, play, comprehend, and incorporate material from his later solos.

I started with track 2, "Three Bags Full".  Now that I have it written down, I'm practicing learning to play small sections along with the recording at a reduced speed.  Learning it slow actually makes it harder to perfectly replicate his "feel".  I'm using the Amazing Slow Downer software program, which I highly recommend.  I transcribed the solo without it at first, and then checked my work at a slower speed and couldn't believe how many details and notes I missed.

You'll notice that I didn't write many of the left hand chord voicings, but used simple rhythmic notation instead.  That's because he's playing mostly stock rootless voicings that all jazz piano students learn at some point.  Scribbling down these notes seemed like a waste of time for my purposes.

I added some analysis, but I'm still analyzing as I go.  I hope to really "get inside his head" over the next few months.

If you would like to listen along as you glance through the solo, here's a YouTube link where someone uploaded it: http://youtu.be/nzkd-N6UrYE
Herbie's solo starts at 3:05. 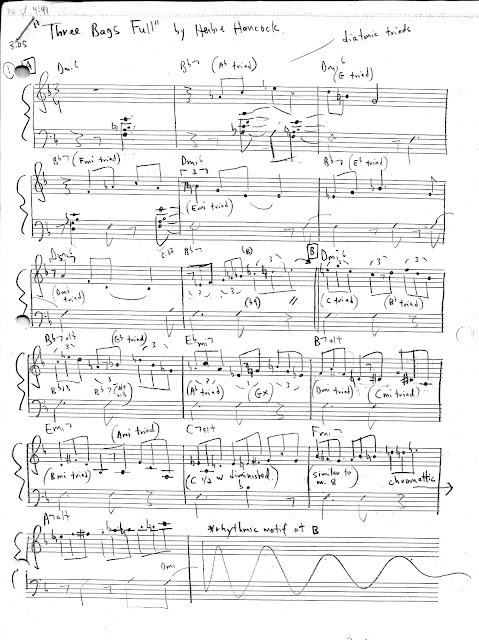 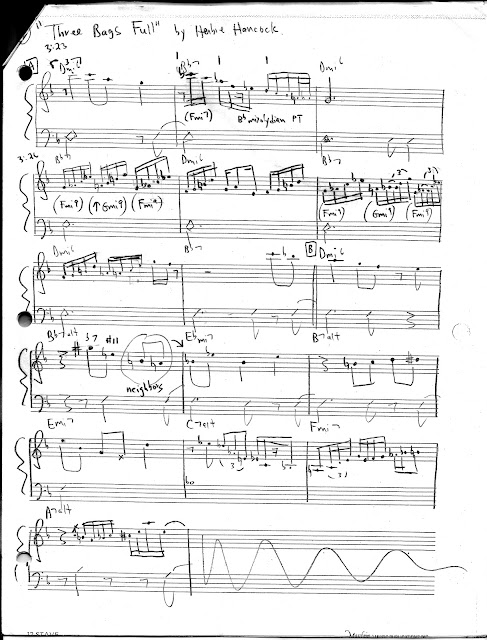 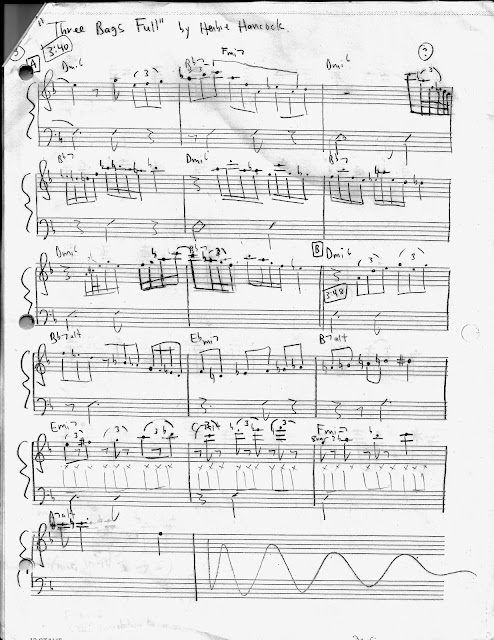 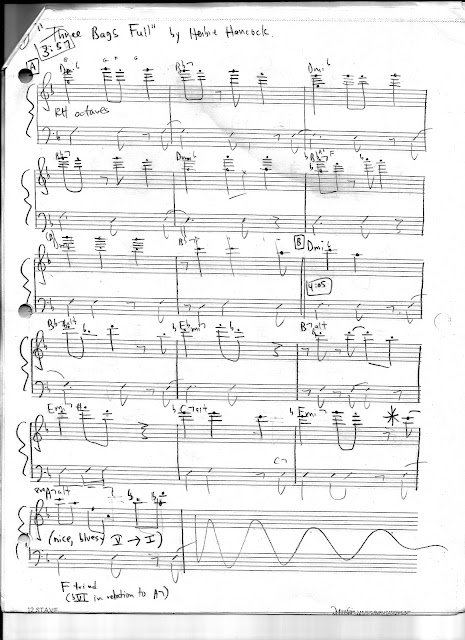 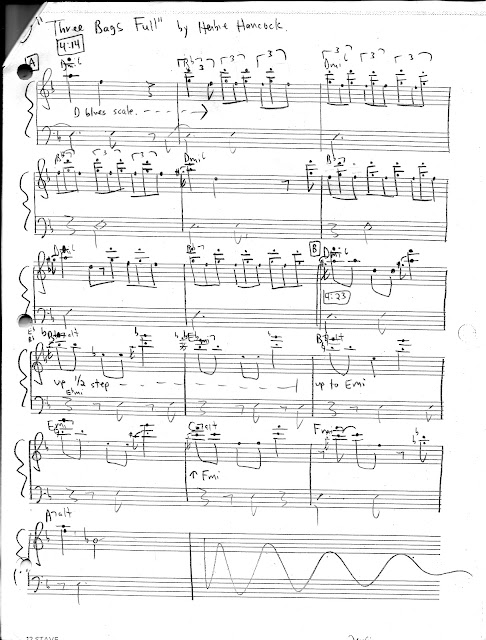 The Rocky Balboa of Jazz Pianists

I'm back to practicing the piano.

I feel a bit like Rocky in training, preparing to make a come back.  I haven't missed a day this week, but I'll admit it hasn't been easy.

I decided to narrow my focus to two things:

The Banacos lines are very chromatic and full of twists and turns.  Charlie referred to them as being "snake-y".  They make for great chop builders.  I plan to stick with one line for a couple of weeks, until I can play it at a good clip, "double fisted" (in two hands), in all keys.  For these I have alloted a 1/2 hour daily.  I set the timer on my phone and commit myself not to leave the piano bench until I hear the buzzer sound.  This has been a far greater challenge than I imagined, but I'm sticking with it, in hopes that it will get easier.

Transcribing has been going relatively well.  I've started using the Amazing Slow Downer software program, and love it!  I'm surprised at how many details I missed in my first run-through "at tempo".  I began with track 2, "Three Bags Full".  I have already completed the right hand, and am moving onto the left hand comping. I will post these solos here, along with some analysis. I'm hoping to incorporate some Herbie-isms into my playing over the next few months.

Here's the solo, starting at 3:05, after Freddie Hubbard and Dexter Gordon.

For the first time in a long time, I'm not practicing in preparation for a gig or recording.  I'm back to just practicing to "sharpen my axe" and elevate my skills.  It feels great.

For about a year I have been working on my third collaboration with visual artists, Deborah Dancy and Ted Efremoff.  "Meadowlark", as we titled it, is a lighthearted celebration of color, seasonal migration and the musical whistles of eastern songbirds.  For this project we added Bart Roccoberton's puppetry as a third artistic dimension.  Although he was involved in discussions and brainstorming at the onset, Bart's contribution was kept a mystery until the day of the presentation.

My music was recorded by my COW ensemble (the Creative Opportunity Workshop), which features Christopher Hoffman on cello, Kris Allen on saxophones, Rogerio Boccato on percussion and me at the piano.

A preview performance of “Meadowlark” was given on Tuesday April 23rd, at 12:30 p.m. in the Nafe Katter Theater.  Colleagues, students, administrator, and members of the community attended.

I ran a video camera from the back of the room to capture the presentation, complete with the (newly added) puppets.  I loved how the puppet troupe heightened the sense of  movement, buoyancy and vitality.  Here is the video:

It is marvelous (and fun!) to have such immensely talented colleagues from diverse disciplines with whom to join forces!

We plan to show all three of our collaborative pieces in the Fall, projected onto the outside wall of the UConn Art/Music building facing the new town center.  We also plan to release a DVD sometime in the near future.  We will keep you posted.

We opened the concert with my arrangement of "Hit The Road Jack", which I have tweaked since it's debut with the Westchester Jazz Orchestra.  Here it is:

I always think of Maynard Ferguson on May 4th.  This would have been his 85th birthday.  I'll be forever grateful for the opportunity I had to tour in his Big Bop Nouveau band (from 1998 - 2000).

I enjoyed playing for him once more in the alumni band formed for his 75th birthday, at Ryles jazz club. I admit that I "teared up" while playing his walk-on theme, "Blue Birdland" again.

He was perhaps the most gracious, humorous and positive person I have ever known.  Maynard's passing was very hard on me and I know I'm not alone in saying I miss him.

I chuckle when remembering a group of us buying him a pair of shoes for his birthday.  When the salesman wasn't looking, we switched one of the two shoes to a 1/2 size larger as his feet weren't the same size. (Maybe that is the highly sought secret to his upper register!)  Fun little memories like this often come to my mind at the least expected moments. 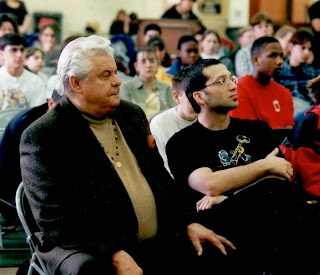 Most of my "road photos" were destroyed by my labrador retriever when he was a mischievous puppy.  But, here is one of Maynard and me listening to the Manchester High School band before sharing some tips. Little did I know then that I'd be settling in Connecticut, just 20 miles away from Manchester.