What my students are doing RIGHT:

Several weeks ago, a YouTube video clip of Branford Marsalis was circulating entitled, "Branford's Take On Students Today".  You can see this clip by clicking here.  Branford is clearly an instigator who likes to stir the pot by taking a strong controversial stance, thereby forcing people to think and respond.  Although there are certainly nuggets of truth in his rant, I don't share the entirely negative viewpoint he has chosen to project.

Lately, my students have genuinely impressed me with their self-initiative.  Here is a short list things I have noticed them doing RIGHT:

This current crop of students is a truly committed bunch.  Their enthusiasm and love for the music is contagious and our relationship is becoming more and more reciprocal, as I find myself learning from them.
Posted by Earl MacDonald at 11:23 AM No comments:

Alma - the next Mary Lou Williams or Tina Fey? 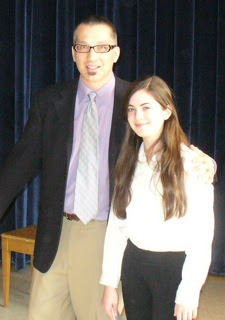 I learned last night that my piano student, Alma Macbride won the Mary Lou Williams Contest, sponsored by Jazz at Lincoln Center.  The contest was for girls aged 15 or younger living in the United States.  She had to submit a DVD performance of herself playing Williams’ “Close to Five” composition.   Her prize is getting to play at Rose Theater with the Jazz at Lincoln Center Orchestra on Nov. 6 and 7, and receiving a pre-concert coaching from the orchestra’s pianist, Dan Nimmer.

Alma’s father is composer, David Macbride, a professor of composition and theory at the Hartt School of Music in Hartford, CT.  I played the premier of David’s Piano Concerto for solo piano and orchestra last year.  Her mother is the award-winning artist, Lisa Macbride.

Prior to teaching Alma, I taught her brother Jimmy, who now studies drum set with Carl Allen in the Julliard jazz program.  Alma was about 8-years-old when she started with me.  At first I was very reluctant to take her on as a student; primarily because of her age.  Out of respect to her parents I agreed to meet with her once to interview her and hear her play.  I’ll never forget her response when I asked why she wanted to take jazz piano lessons.  With an almost defiant, indignant attitude she responded, “So I don’t sound like an idiot on gigs, after taking a flute solo and then sitting down at the piano to comp.”  The deal was pretty much sealed at that point.

Alma is an interesting character.  I am convinced that she could do pretty much anything she wants in life, with the exception of playing professional basketball.  (I think she's still well under 5 feet tall.)  If Alma wanted to be the next Renee Rosnes, it wouldn’t be a problem for her.  She has the talent, and she knows how to get things done.  For that matter, if she set her mind to becoming the first woman President of the United States, I could see it coming to fruition.  I think she currently aspires to be a comedic actress on Saturday Night Live.  For me, its refreshing to work with a student who has talent, but is also a normal kid, with many different interests.  As I write this, her Facebook status reads: "YANKEES!", rather than "I was selected to play with Wynton Marsalis next month!" (I like that.)

Several months ago, when I saw the Mary Lou Williams competition posted, I knew Alma could be a contender.  I asked myself, “how many kids her age can do what she can do”.  She sight-reads well.  She is a very capable at ‘comping’ (accompanying) through any set of jazz chord changes.  Her improvisation skills are coming along and she is starting to get a decent grasp on the bebop language. She has no trouble transcribing, learning and memorizing a recorded Kenny Barron solo in a two-week period.

The funny thing was, she didn’t want to enter the competition.  It took several conversations and e-mails to her parents before she finally committed to entering.  I worked with her only once on the piece --- the day before it had to be recorded.  We figured out a way for her to mimic the stride piano sound without having to reach 10ths, which she do can’t because of the size of her hands.  When I looked at the music she was asked to prepare, I couldn’t believe the absurdity of them (Jazz at Lincoln Center) asking girls under age 15 to prepare a piece filled with left hand 10ths.  Many of my 21-year-old male students at the university don’t have the hand span to reach tenths.  Whoever chose this piece really should have given some consideration to the hand size of young women!

Coincidentally (or not!), Alma is a freshman at the same high school which produced Brad Mehldau, Joel Frahm, Kris Allen, Pete McGuinness, Richie Barshay, Erica vonKeist and others.


Several people have asked if I plan to attend the concert. I can't imagine not attending Alma's New York debut, and I really look forward to it. A couple of years ago I told her that playing would become a lot more fun after she had finished sweating through the learning of voicings and licks in 12 keys. That day has come: November 6 & 7 --- " Jazz for Young People: Who is Mary Lou Williams?" with host Wynton Marsalis and the Jazz at Lincoln Center Orchestra, starring Alma Macbride.